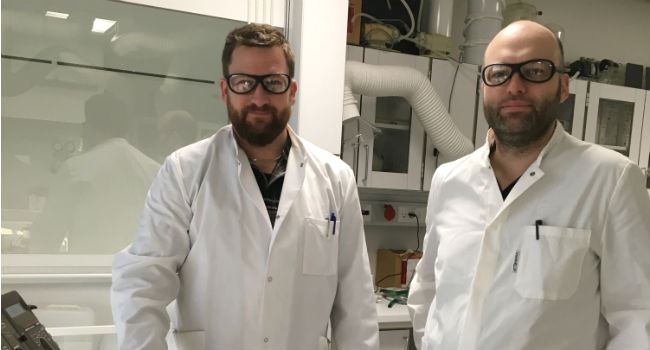 Future batteries are made of mold

Researchers from Aalborg University have built the world's first battery made of biological material derived from mold. The technology is just as effective as that in conventional batteries, but far more environmentally friendly and sustainable. In the coming years, it could revolutionize the way we store power.

Jens Muff and Jens Laurids Sørensen of Aalborg University Esbjerg are in the process of changing the way we will produce batteries in the future. The two researchers, along with a small group of PhD students, are the first in the world to be developing a method to manufacture batteries of biological material derived from mold.

In recent years, battery development has accelerated. The switch from fossil fuels to green energy from wind and sun makes it imperative to be able to store power in an efficient way so that we can have access to energy when the sun isn’t shining or there isn’t any wind.

Today, most batteries are made with rare metals like lithium or of residues from the oil industry. This means that the batteries have a significant carbon footprint – not only when they are produced, but also when they are discarded. Therefore, they have long been an environmental threat in an increasingly environment-friendly energy supply chain.

With mold-based battery technology, the active substances can be grown in sugar water in a lab. When the capacity is exhausted and the battery needs to be replaced, the remaining substances are 100 percent biodegradable.

The idea of using substances derived from mold to store energy is not an obvious solution unless you are a true fungus nerd. And fortunately that’s what Jens Laurids Sørensen is.

Molds can change color when they are exposed to light. They do this using pigments, he explains. It is actually a defense mechanism molds use if, for example, they are exposed to UV radiation. The fungal pigments have the property of being able to oxidize and reduce – they can accumulate and discharge energy. These are exactly the same properties you see in batteries.

With funding from sources including Independent Research Fund Denmark, the researchers launched a four-year research project last year that should culminate in a large, fully functioning battery based on biological material derived from mold.

The small research group was already successful during the first year in isolating the fungal pigments, growing them in the lab and building a small, fully functioning prototype.

The first battery we built is not particularly large – only around 1.5 volts. But it proves that technology works in reality, not just in theory, says Jens Laurids Sørensen.

Right now, the researchers are working with two PhD students to refine the blend of technology and biology and identify the most suitable fungal pigments. Their genetic composition must be analyzed, isolated and grown in a lab before they can end up in a battery.

When our project runs out in three years, we should have produced a battery that can be used to store power from our solar cell system here on campus, says Jens Laurids Sørensen, and continues: The aim is that it should be super cheap to produce so it can compete with the traditional metal or oil-based batteries. If we can replace them with biological batteries that are easy, environmentally friendly and cheap to produce, the potential is enormous. Then they just need be put out there.

Ordinary batteries are normally produced from metals such as Vanadium. New here is that we have begun to produce rechargeable batteries of the redox-flow type from electro-active organic residues from oil production. The substances are called petroquinones. Quinones can accumulate and discharge power a certain number of times before they are used up and must be discarded.

Pigments from certain types of mold have properties that are very similar to quinones. 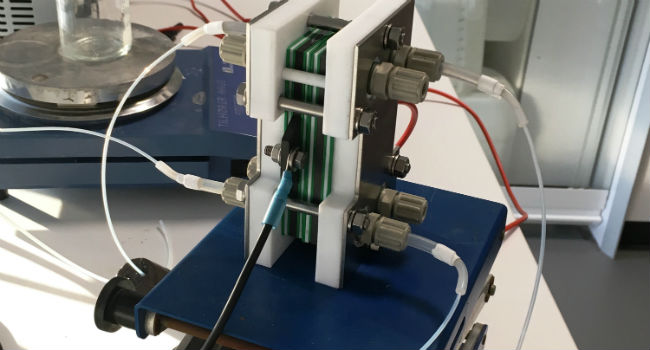 Prototype of the mold battery