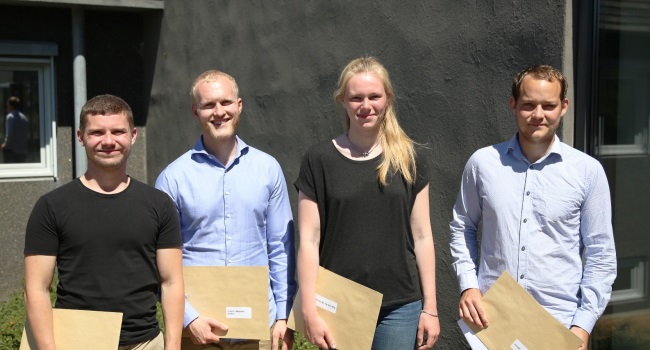 At the graduation ceremony, a scholarship of DKK 5,000 was awarded by De Frie Erhvervs Investeringsfond i Esbjerg. The foundation aims to support and develop the business community in Esbjerg by awarding a scholarship to a person or group that has studied in Esbjerg and will live and work in the area. 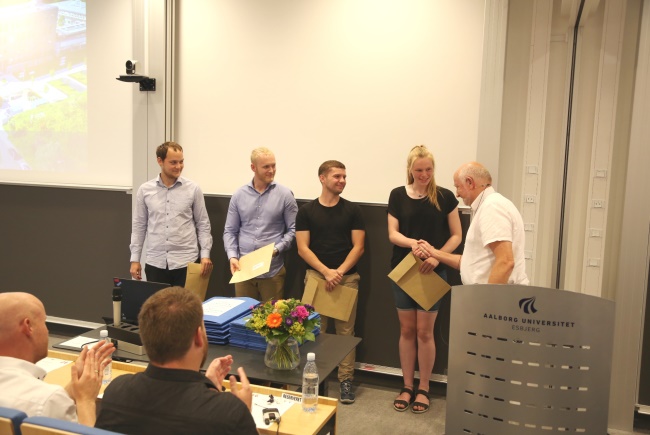 "We are very happy and proud to receive the scholarship," says Kasper Laugesen: "This is a great recognition of the work we’ve done, and it's especially nice that the nomination comes from our professors and sparring partners in the program."

The group just completed their Master's degree with an impressive grade of 12 for their final project on modeling and control of offshore wind turbines mounted on a floating foundation. This project, where the group repeatedly demonstrated an interdisciplinary approach at a very high level, was instrumental in their being nominated for the scholarship. In the project that they worked hard on in the AAU Esbjerg offshore lab since the fifth semester, the energy students studied how various wind and wave conditions affect the movement of the foundation and the turbine tower. This knowledge is important for designing an optimal and durable wind turbine. The group’s work has thus been a significant factor in the Department of Energy Technology now having a fully functioning scale model of a wind turbine on a floating foundation – a test setup that reflects research at the highest international level.

"We designed a model wind turbine ourselves at a scale of 1:35," says Jesper Kirkegaard Jensen: "We had the turbine foundation made at a local firm, and the actual nacelle housing was built at AAU in Aalborg, but we 3D-printed the wings ourselves here at AAU Esbjerg. It has been a very interesting process. In addition, we also optimized the lab’s wind generator so the test conditions are now even closer to real conditions at sea." 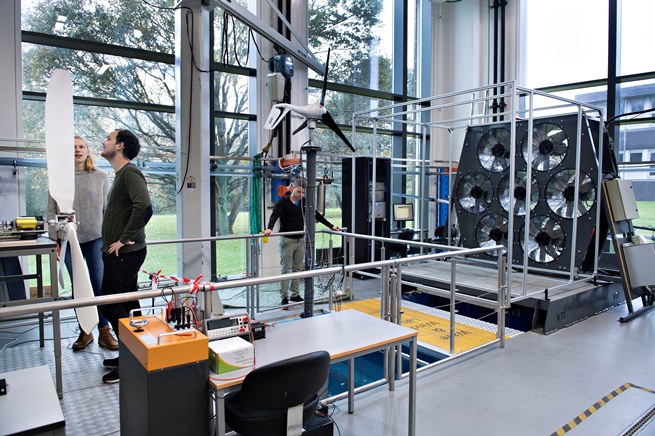 Another concrete outcome of the project thus far is a scientific article that focused on validating a model of a floating wind turbine’s movement that the group has published. Their results will be presented later at the highly respected IEEE Control Technology and Applications Conference in August 2018. However, this is not the group's first scientific publication. In the third semester they published a scientific article based on their semester project on extending the battery life of mobile phones using solar cells and movement energy.

Along with the group's curiosity and learning abilities, the students’ desire to disseminate their results also figured into the nomination for the scholarship. The group has always taken part in the university's activities such as Open House and tours where they have been very engaged in presenting their project and results in a clear and concrete manner. They have also become famous faces in the corridors after having participated in several videos and ads for Aalborg University.

After graduation and a well-deserved summer vacation, Jesper Kirkegaard Jensen is starting a job as an engineer at Ørsted Wind Power. "The rest of us will have to see what the future holds," says Kasper Laugesen: "We are open both to jobs in the offshore industry as well as a PhD if the opportunities arise."