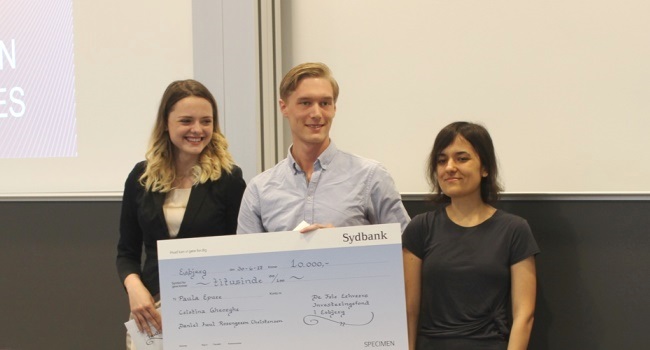 At the graduation ceremony, a scholarship of 10,000 DKK was presented by De Frie Erhvervs Investeringsfond i Esbjerg.

The foundation wants to support and develop the business community in Esbjerg by awarding a scholarship to a person or group that has studied in Esbjerg and will live and work in the area.

Kjeld Clausen, president of the foundation and director of Esbjerg Farve- & Lakfabrik, presented the check of DKK 10,000 to three happy graduates from the Medialogy program: Paula Epure, Daniel Christensen and Cristina Gheorghe.

The students were awarded the scholarship for their impressive project work in virtual reality for rehabilitating patients with brain injuries.

Over the past year three and half years in the Medialogy program, they created the platform VR-Rehab which was developed and tested in conjunction with Southwest Jutland Hospital in Esbjerg, its Department of Neurological Rehabilitation in Grinsted, and Esbjerg Municipality. They developed a product from an early prototype to a nearly finished product, where, for example, patients with brain injury can practice everyday activities, such as slicing bread or making coffee, using virtual reality glasses with accompanying software. The product is expected to be very useful for therapists as well as patients.

"We are very happy and grateful for the scholarship", says Daniel Christensen: "It's great to receive recognition for our hard work, and we are very honored that Michael Boelstoft Holte, Section Head for Medialogy, nominated us."

Based on their project work, Daniel, Paula and Christina have started their own company, and aim for VR-Rehab to be widely used commercially.

"We expect that the money from the scholarship will go to further developing our prototype," says Daniel. In September, we want to begin a larger usability testing of our product, and we are also investigating the CE Marking, a patent and other approvals."

In April, the group won this year's Innovation Award, and back in February they received a major recognition from the Siemens Foundation who donated funds to their project. As of September, VR-Rehab will be part of Innovation Fund Denmark’s Entrepreneurial Pilot scheme which aims to assist entrepreneurially talented new graduates.